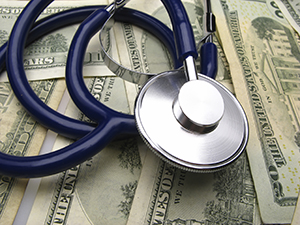 medical stethoscope on background dollar denominations, close upYet despite the rising costs, the survey found few employers reported changing workers’ hours to avoid their responsibilities under the Affordable Care Act. In 2016, the ACA provision requiring employers with at least 50 full-time equivalent employees to offer health benefits to full-time workers or pay a penalty took full effect. The survey found 93 percent of firms with at least 50 employees offered health benefits to at least some employees, and the vast majority said their coverage meets the ACA’s requirements for value and affordability.

This year’s family premium increase is similar to last year’s (4 percent) and reflects a significant slowdown over the past 15 years. Since 2011, average family premiums have increased 20 percent, more slowly than the previous five years (31 percent increase from 2006 to 2011).

In 2016, 29 percent of all workers were in such plans, up from 20 percent in 2014, while a shrinking share of workers (48 percent in 2016, down from 58 percent in 2014) are enrolled in preferred provider organization (PPO) plans, which have higher-than-average premiums.

For the first time, the survey also found that half (51 percent) of all covered workers faced deductibles of at least $1,000 annually for single coverage. This includes two thirds (65 percent) of workers at small firms (three to 199 workers), who typically face higher deductibles than workers at large firms (200 or more workers).

In some cases, employers make contributions to tax-preferred HSAs or HRAs, which workers can use to pay part or all of their deductible expenses, thereby reducing their effective deductible. Counting employer contributions this way would reduce the share of covered workers with deductibles of at least $1,000 to 38 percent.

“The importance of this study is its ability to inform decision makers from all sectors as new or emerging strategies for health care coverage are being constructed,” said Dr. Ken Anderson, Kaiser’s HRET’s chief operating officer.

How does your firm’s health insurance coverage compare to your competitors’ and to other local employers competing for the same labor pool? Contact us for more information and an insurance review.

This update is for general informational purposes only. While we have attempted to provide current, accurate and clearly expressed information, this information is provided “ as is ” and GCG makes no representations or warranties regarding its accuracy or completeness. The information provided should not be construed as legal or tax advice or as a recommendation of any kind. Users should seek professional advice from their own attorneys and tax and benefit plan advisors with respect to their individual circumstances and needs.