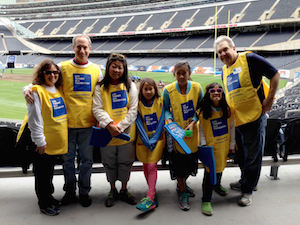 Amyotrophic Lateral Sclerosis (ALS), also known as Lou Gehrig’s Disease, is a progressive neurodegenerative disease that affects nerve cells in the brain and the spinal cord. It causes muscle weakness, difficulty swallowing and breathing, and often in later stages, paralysis. In most cases, while the body continues to deteriorate, the mind remains unaffected.

Since 1977, the Les Turner ALS Foundation has been devoted to research, patient care, and education for ALS and other motor neuron diseases. The Foundation serves more than 90% of ALS patients in the Chicago area, and has raised more than $52 million to fight the disease.

The Les Turner ALS Walk For life is one of the world’s largest ALS fundraising gatherings, with thousands participating each year. Since its inception in 2001, the Walk has raised more than $10 million to support patient care and cutting-edge research at Northwestern Medicine.

In 2014, GCG participated in the Les Turner ALS Walk for Life at Soldier Field in Chicago.

For more information on the ALS Walk for Life and the Les Turner Foundation, visit http://www.lesturnerals.org/donate/special-events/als-walk4life/.