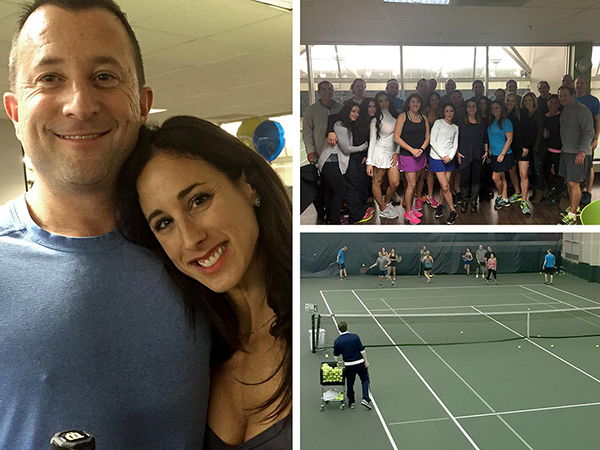 GCG is pleased to recognize its own Vice President of Wealth Management Mitch Ratnow, who hosted a couples’ tennis-themed charity event with his wife, Amy, on Friday, January 29, in order to raise funds for the House of Peace, a domestic violence shelter in Northern Lake County, Illinois.

The tennis event took place at College Park Athletic Club in Lincolnshire. Inspired by their son’s suggestion to donate to charity, Mitch and Amy decided to organize an event to raise money for a charitable organization. After spending the summer playing tennis as a couple, they began planning for the event in September.

“For years, my wife and I have been trying to host a charity event that would involve our entire family,” Mitch said. The Ratnows invited friends, family, and clients to the event. They also received support from about a dozen sponsors who donated food and drinks for participants, provided prizes for the winners, and donated baked goods to House of Peace.

Each couple who participated in the drills played for the sake of friendly competition. About 15 couples took part in the event, raising much needed funds for the House of Peace Shelter. Mitch and Amy hope to turn this event into an annual tradition.

“The goal is to do this every year, and to keep building it,” Mitch said. He added that he hopes to see more people get involved in the charity event, and that the donations collected may go to a different cause each year.

The House of Peace Domestic Violence Shelter maintains a mission to provide secure, temporary residence for women and children suffering from domestic violence. Opening its doors in November 2011, the shelter prides itself on its programs and resources designed to heal, empower, and sustain the families it serves. Since it began, The House of Peace Shelter has served nearly 50 women and over 80 children.

For more information on the House of Peace Shelter, visit http://houseofpeaceshelter.org/.